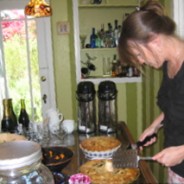 I never plan the discussion topics, no even know where they might go when I invite authors to come join us. Amy’s salon went in all directions from justice in the prison system to ghostwriting in France. Is there another way to describe that conversation than eclectic and educational? I saw at least six people pair off and talk about how much they wanted to be in touch outside of the salon. That makes me happier than pie. It’s like an adult playground, only without the skinned knees, and with more wine.

Susan, apparently, enjoyed the salons very much. No pressure, Susan, you get that second book done and I hope you’ll come back and let me bake more pies for your. A group of people fell in love with you that Sunday in my living room. 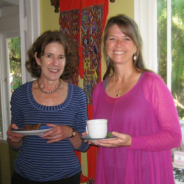 The first time I met Cai was about 45 minutes before the salon started. I instantly fell in love. She was all I expected and more. She’d been introduced to me through my good friend Meredith Resnick who writes The Writer’s [Inner] Journey. Mer had said Cai would be perfect for one of my salons because she’s so personable and energetic. That’s exactly right. The day went along famously with the bubbly talk of characters and inside scoop on the writing life. I’ll admit we did gossip a bit about authors we know. If you’ve been nice to us we said...

Plenty of Sparkle at Christine’s Salon 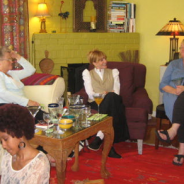 We shared everything from gossip, to foot massages, to pie and a few literary secrets after several champagne cocktails. We learned how Christine Schwab would restyle Donald Trump’s hair. We learned to NEVER EVER wear tight white pants. But most importantly we learned that ARTHRITIS is never said allowed in Hollywood. Christine is the official spokesperson for Rheumatoid Arthritis and is doing all she can to push the knowledge that there is help for folks with RA. She’s trying to get some big name celebrities to come forward so RA isn’t a...