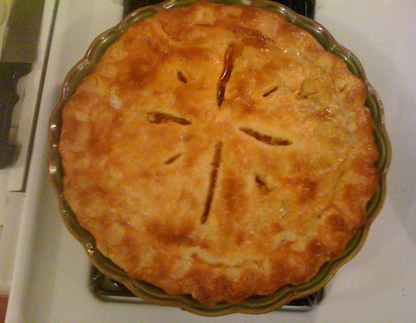 {I’ve also made this pie into small hand-held pies with a tart mold and it’s the perfect filling for this. I also made a meatless version and it was delicious as well, and satisfied my vegetarian friends.}

Blanch eggplant: Slice into one-inch rounds. Lay out flat on paper towels. Sprinkle with salt. Set the timer for 10 minutes. When the time chimes, wipe off the salt and water that has been released from eggplant slices. Repeat on other side.

Slice zucchini length-wise into halves. Grease peppers, zucchini and blanched eggplant with olive oil and grill on outdoor grill until just tender, but not overdone, about 5 minutes both sides.

Dip the tomatoes in boiling water to loosen the skin, then peel and dice.

While sautéing, sprinkle garlic cloves with olive oil and roast until just turning brown in toaster oven or regular oven (watch closely or it will burn easily if you use broiler setting. I know this from experience.)

Once onions have browned and mushrooms have released their water, about 10 minutes, add the pork and brown.

Cut grilled veggies into bite-size pieces, remove seeds from peppers, and add to the meat and mushroom pan. Add the tomatoes and oregano (about 2 TBS). Cook for 5 more minutes on a higher heat stirring constantly.

Add salt and pepper to taste. Remove crust dough from fridge about 15 minutes before filling is done.

If the pisto sauce has too much liquid, let it boil away stirring to keep the ingredients from sticking to the bottom of the pan. The sauce should be a thicker consistency with no wateryness to it. Otherwise your pie will be soggy. Finding that right middle ground is the essence of a truly comforting pie. Your guests will thank you.
Assembling the Pie:

Divide the dough into two halves, one slightly larger than the other. Roll the larger half into a circle a few inches larger in diameter than your pie plate. Fold it in half to lift and lower into the pan.

Spread 1 cup of shredded Manchego cheese on the bottom of the crust. Pour thickened pisto sauce into crust.

Roll out top crust and lay over filling. Trim edges of both crusts so they are about an inch wider than the pan. Dampen edge of bottom crust, seal the two crusts together gently. Fold under one time all the way around, and crimp decoratively either with your fingers or a fork to flatten. Slice think steam vents in top of crust.

Mix one egg and a tablespoon of milk. Brush over crust. Bake pie in center of 425 degree oven for 35-45 minutes, or until golden brown and a knife slipped into a vent opening comes out piping hot.